Work sessions: free, until full capacity is reached, with prior registration by filling out the following form from 4 November (capacity — in-person: 12 people; online: 20 people). Aimed at people and collectives who either work or have a special interest in the spheres of feminism or anti-racism. Given the limited number of places, priority will be given to migrant and/or racialised people and collectives.

Inside the framework of:

In the current social climate, the existence of political and cultural forces which appear to be handed down from fascism and historical extreme right movements are today a tangible reality. These forces call into question the continued existence of consolidated emancipatory conquests after centuries of struggle.

The programme The New Reaction. Antidotes and Synergies sets out to explore and pinpoint the means that mobilise these forces, understanding the place from which they emanate, the designated enemies and why they are so, and the differences and similitudes they reveal in different geographies. Thus, knowing the characteristics of these new forms of fascism becomes necessary, for they can denote a long-lasting democratic recession in a context defined by expansion and the global surge of neoliberal politics.

Each of the sessions that make up this programme seeks to create spaces of thought rooted in new feminisms, struggles for recognition and the equality of post-colonial and racialised subjects or migratory social movements, as well as other aspects.

With the aim of hybridising forms and putting forward other modes of approaching the political and the collective, sound artist Mattin will perform Towards an Anti-Fascist Musical Score, a performance intervention which seeks to activate a collective reflection with the audience in order to work on the power of rituals and catharsis to generate, from the body, non-theological and anti-fascist social interactions.

Nuria Alabao is a journalist and researcher who holds a PhD in Anthropology. She is part of Foundation of the Commons and coordinates the section on feminisms in the digital publication Ctxt. Currently, she is researching connections between feminism and post-fascism movements, collaborating with various media, and has participated in collective publications with articles such as “Why Neo-fascism is Anti-Feminist” in Neofascismo. La Bestia neoliberal (Siglo XXI, 2019) and “Gender and Fascism: The Renewal of the Extreme Right in Europe”, in Un feminismo del 99% (Lengua de Trapo, 2018), to mention but a few.

Fatiha El Mouali is an anti-racist activist who works to provide refuge for migrant people. With a degree in Economic Science, she is also a doctoral student at the Autonomous University of Barcelona. She is a spokesperson for Unity Against Fascism and Racism in Catalonia and is part of the Granollers Table of Equality and vice-president of the Mothers’ Association Against Racism. Furthermore, she is co-author of the volume Combatir la Islamofobia. Una guía antirracista (Combatting Islamophobia. An Anti-Racist Guide, Icaria, 2016).

Mattin is a sound artist. His work focuses on the conceptual investigation into noise and improvisation, exploring strands that include the role of listening in relation to the immeasurable accumulation of digital information and at a time of mounting polarisation and social fragmentation; or the potential non-verbal communication can activate between bodies participating in a reflexive encounter. Moreover, he has co-edited, with Anthony Iles, Ruido y capitalismo (Noise and Capitalism, 2011) and participated in documenta14 (2017) with the “durational” concert Disonancia social (Social Dissonance).

Marisa Pérez Colina is a political scientist and activist whose work is linked to projects and collective experiences of feminist research-action — Precarias a la Deriva — and to defending the right to mobility and the rights of migrant people — Asociación Sin Papeles de Madrid and Papeles por Derecho. She also participates in the movement for the right to housing and the city — Lavapiés ¿dónde Vas? and Asamblea de Bloques en Lucha — in addition to the municipal commitment La Bancada, previously Municipalia-Ganemos. She is also a coordinator in Foundation of the Commons.

Sara R. Farris is a lecturer of Sociology at Goldsmiths University (London). Her research centres on the theoretical constructions of racism and nationalism, the Orientalist/Westocentric representation of women in the Western context, and gender, race and social reproduction theories, primarily focused on female migrants from Eastern Europe.

Fernanda Rodríguez López is a philosopher and member of Foundation of the Commons. She has participated as a speaker in the training space Nociones Comunes on numerous occasions, and her work encompasses themes such as the history of sexuality and bourgeois culture, the formation of gender and the analysis of the hetero-patriarchal family.

Renata Silva de Souza is a journalist, writer and feminist who was born and grew up in Favela da Maré, in the Zona Norte neighbourhood of Río de Janeiro. She holds a PhD in Communication and Culture and has participated in social movements, in addition to being part of the Human Rights Commission of the Legislative Assembly of the State of Río de Janeiro. She was chief of staff for Marielle Franco, the councillor murdered in 2018. At the present time, she is a representative in the Legislative Assembly of Río de Janeiro for the Socialism and Liberty Party (PSOL).

Esther Solano Gallego holds a PhD in Sociology from the Complutense University of Madrid (UCM). She is a lecturer in International Relations at the Federal University of São Paulo and lectures on the UCM’s International Interuniversity MA in Contemporary Latin American Studies. She specialises in political sociology and has put together a number of books on the situation in Brazil, including ¿Hay salida? Ensayos sobre Brasil (Is There a Way Out? Essays on Brazil, 2017) and El odio como política (Hate as Politics, 2018).

Brigitte Vasallo is a writer, professor and anti-racist, feminist and LGBTI activist. Her work is defined by her critical stance on gender Islamophobia, the denouncement of purplewashing and homo- and femonationalism, in addition to her defence of polyamory in affective relationships. 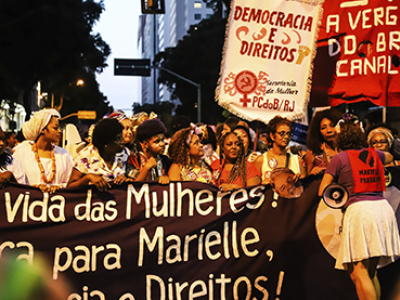 A conversation between Renata Souza and Esther Solano Gallego


Over the past decade, the political changes in Brazil have been at the forefront of global analyses as a sign of this new century’s global shift. This framework of mass inequality has seen women acting as life’s support pillars. This conversation between journalist and congresswoman, Renata Souza, and professor of International Relations, Esther Solano, sets out a framework of discussion to analyse strategies of resistance from Brazil’s working classes and, more specifically, black women for the right to life and democratic legitimacy, in addition to their role in upholding the community during the pandemic. 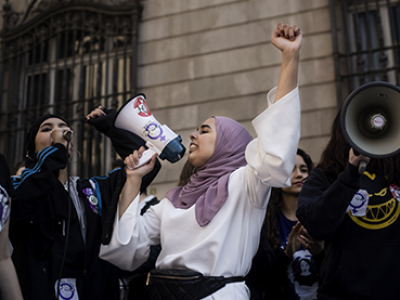 Conceived as preparatory work ahead of the afternoon’s public activity, this session collectively approaches a series of textual and audiovisual materials handed out to participants previously, with the aim of pooling experiences, reflections and questions around femonationalism.

Strategies of rising conservatism have found a point of contact among certain sectors of white and Western-centric feminism and are condensed in the notion of “femonationalism”. The term designates certain discourses that stereotype racialised women as victims without the capacity for agency, and with decisions made in their name and determined by men in their family sphere, along with the constraint of being foreign.

This session looks to analyse the convergence of discourses from the extreme right, those belonging to self-titled feminists and neoliberal public policies of “integration” inside the European framework. What material consequences hide pleas centred on remedying and emancipating Muslim women, putting them to work in a privatised sector that conceals and segregates domestic and care work? 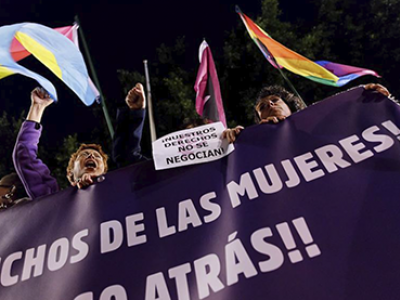 Conceived as preparatory work ahead of the afternoon’s public activity, this session collectively approaches a series of textual and audiovisual materials handed out to participants previously, with the aim of pooling experiences, reflections and questions around the demonisation of feminism.