Fifty years after the first Fluxus festival in Wiesbaden in 1962, considered a milestone in the founding of the movement, this program takes a look at Fluxus by examining its derivations and reinterpretations. Because of its complex, performative and decidedly anti-disciplinary nature, Fluxus is one of the most important art movements (it is sometimes described as a group or even an anti-movement) since 1945. However, its rhizomatic and cosmopolitan tension has resulted in it occupying a secondary spot in the narrations of contemporary art, and in it being situated in a fragmentary and superficial manner in the space between institutional critique, conceptual art and performance art. The fact that it arose at the same time as pop art, conceptual art and minimalism, has done nothing but heighten this peripheral nature. But Fluxus actually developed as a sphere from which to confront these dominant models: it represents pop unrelated to celebrity, but involved in the analysis of mass culture; it is conceptual, yet has nothing hermetic and is instead based on the performative capacity of language.

So, Fluxus to the People does not offer an analysis of the works but rather an opportunity to practice them, a collaborative exercise. It is not pluralist, in that it does not claim to be the facile co-existence of different positions, but it does promote a form of temporary collaboration in a given project without causing differences to evaporate. In short, it is all about reflecting on what "we" means, even if only for awhile.

The program has three fronts: a documentary space, a series of participatory actions that are very different from one another, and a concert. 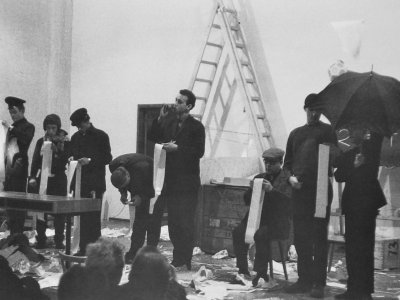 This concert starts with the idea that the compositions described in Fluxus scores develop a virtuosity already existing in all of us and, at the same time, it seeks to share the ideas and works that came together under Fluxus. For this reason the performers are chosen by means of a general call for participation, in which no previous experience is required; thus blurring the lines between the audience and the piece of music. The aim is not to repeat the events that took place in the various Fluxus concerts and festivals, but rather to look into how they can be interpreted today.

The aim of this show is to situate Fluxus within the dialectics of the collective, of play and of the exploration of different narratives for art history, based on the idea of the diagram as a non-hierarchical map. The show also seeks to reactivate a large part of the Fluxus archive at the Museum's Documentation Centre and to help people to get to know this archive. The works displayed are examples of how practically all documentary production in Fluxus contained a performative aspect in which textuality mingled with action. The exhibit looks at this idea from a broad perspective that attempts to draw unsuspected links with other moments, examples and movements from the cultural history of the 20th century, ranging from the productivism of the Soviet group LEF at the end of the 1920s all the way through the North American comedian and musician Spike Jones, who enjoyed great popularity in the 1950s. The documentary display also serves as an informational hub and meeting place for certain planned activities, such as the urban itineraries, inspired in the fluxtours.