The Chair of Situated Thought

Thinking in terms of being situated means to include deployed knowledge which is generally excluded from standard bibliographies. It means working with the production of thinkers and collectivities which, outside the enclosures of institutionalised knowledge, put a strain on academic hegemonies.

Education programme developed with the sponsorship of the

The Chair of Situated Thought is a shared project that moves between Universidad Autónoma Metropolitana (UAM; campus Cuajimalpa, Mexico City) and the Museo Reina Sofía, and aims to delve deeper into the problems of collaborative platforms and collective work experiences developed in different university, artistic and activist spheres in Latin America, for instance the Seminar of Critical Cartographies (UAM) and the Southern Conceptualisms Network, among others. Encouraging spaces of dialogue and specific actions — encounters, seminars, publications, archives — the project looks to coordinate links between different experiences, stances, ways of doing and initiatives of thought projected from the South, and understood not so much as a geopolitical notion, but as a place of critical utterance which is necessary with respect to dominant discourses and movements and their centres of power. Thus, the Chair underscores the singularities and pertinence of an intellectual and artistic production that converses with its immediate social and political surroundings, and which aspires to have an impact by means of new forms of aesthetic and political imagination in the specific conditions of its environment.

Curator of the Chair of Situated Thought 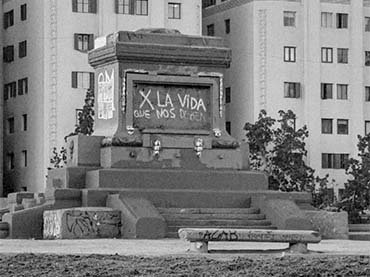 The Chair of Situated Thought

De-Constituent: Practices and Imaginaries to Come

The Chair of Situated Thought. Art and Politics from Latin America