Picasso in the Monster Institution. Art, the Culture Industry and the Right to the City 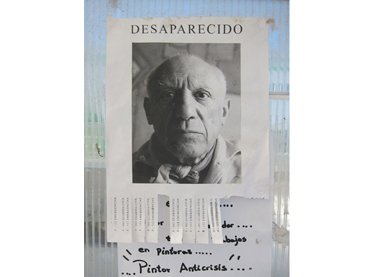 This seminar, framed inside the European network Midstream, seeks to reflect on the role of culture in those social movements that vindicate uses of urban space outside a city model which looks towards art to strengthen tourist imaginaries, thus conditioning its institutions and reception. The lectures, held in Málaga, examine the way Picasso is used to shape the contemporary city.

Picasso in the Monster Institution. Art, the Culture Industry and the Right to the City strives to create distance from the predominant sense of celebrations and large-scale cultural commemorations which, in understanding art as an attractive resource, place history and artistic experience inside a frame with exclusive ties to tourism and urban leisure. It also calls into question these logics and explores possible alternatives.

This seminar unfolds inside the context of Midstream, a European network of university and institutional research into new audiences and devices of cultural mediation, comprising eiPCP (the European Institute for Progressive Cultural Policies), Museo Reina Sofía, and the Latvian Center for Contemporary Art, and seeks to reflect on and debate the role of culture and art in those social movements that vindicate uses of urban space outside a city model which looks towards art to strengthen tourist imaginaries, thus conditioning its institutions and reception.

The recognition of Picasso’s work is one of the best examples to analyse the contradictions and complexities of these logics. Today, the work of the artist from Málaga is broadly appreciated and disseminated, yet, equally, such a reception cements stereotypes associated with the heroic and fetichized idea of artistic avant-garde movements and their most unrelenting myths, for instance the originality, brilliance and autonomy of art. These values obscure one of the 20th century’s most complex bodies of work.

How can the contemporary city fight against this integration of art, and its audiences and institutions, in the service economy and recover the potential of one of the most challenging oeuvres from the avant-gardes in its historical scope? What are the devices and anomalous or “monstrous” institutions which are able to place the work in a space which is alien to this integration? The seminar sets out to reflect on these questions via two round-table discussions and a workshop on the monumental imagary of Picasso and the contemporary city, conducted by Rogelio López Cuenca and Elo Vega, which will begin at the close of the lectures and shall be expanded upon in the future. The first session will debate monstrous institutionalism’s modes of relationship, calling upon different European networks and spaces (S.a.L.E., Venice; Transform-eiPCP, Berlin and Vienna; and La Invisible, Málaga), and theorists specialised in testing mediation experiments with these instituent machines. The second analyses the relationship between art and gentrification through the uses and abuses of Picasso’s work, putting forward a model of artistic experience which eludes the so-called creative industries and economies.