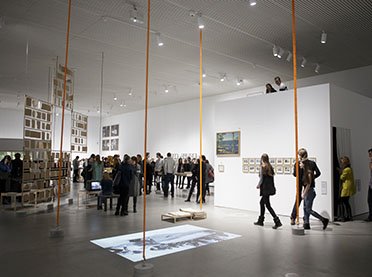 Listening was the first way of learning the discourse. Listening crystalizes the language in our bodies. Sound makes the speech tangible, almost palpable. When we speak the voice resonates in our larynx as well as in the place of the one is listening.

The recording of the voice transmits it singularity much better than it does the letter and the image. The resonating voice, as a body, has the capability to define itself, without saying any concrete word. In that sense, the listening body can also be defined by internalizing the discourse.

The RRS, Museo Reina Sofía Radio, have worked on this process of constructing subjectivity in two aspects. On the one hand allowing the voice of artists and curators to understand the conceptual and visual production. On the other hand, curating sound works, not with the aim of analyzing them in a historical-artistic context, but in order of showing their ability to produce meaning, discourse and knowledge.

These two paths will be explored in the collaboration with the Midstream, understanding that the use of sound as a form of communication and diffusion has an underrated potential to reach a more diversified audience. This is why, as part of the project, there will be an implementation of the RRS web that will allow to embed its content in different digital spaces, such as the Midstream website, and the partner’s websites.

The research process is focused on the production of a series of podcast by the RRS team (and other collaborators) dedicated to explore specific aspects, revolving around the encounters of the Midstream network and the proposals emerged within the project, like the first podcast of the series, recorded at La casa invisible (Málaga) during the seminar Picasso in the Monster Institution, or the group of podcasts based on the Latvian Center for Contemporary Art exhibition YOU'VE GOT 1243 UNREAD MESSAGES. Last Generation Before the Internet. Their Lives, which is the framework for interviewing artists and curators, but also to present a parallel research on its contents, together with a curated a selection of sound pieces in relation to the show. The last Midstream meeting in 2018, hosted by the eipcp, will be the moment to gather together the different experiences emerged along the process of collaboration among the partners.