Exhibition view In the Open or in Stealth. The Unruly presence of an intimate future. MACBA, Barcelona, 2018. Pictures by: Roberto Ruiz

Our Many Europes. Europe's Critical ‘90s and the Constituent Museum

Our Many Europes is a programme organised by the European museum confederation L’Internationale and co-financed by the European Union’s Creative Europe programme. The members of L’Internationale and its partners HDK- Valand Academy (University of Gothenburg, Sweden) and the National College of Art and Design, Dublin (NCAD, Ireland) will present more than 40 public activities (conferences, exhibitions, workshops) in the framework of this project.

The 1990s is the decade contemporary Europe was born — Europe expanded and diversified when technology and post-Cold War politics turned the world into a ‘global village’. Understanding who we are today — the challenges we face, the possibilities we have — begins post 1989, when a divided Europe ended and the plurality of the many Europes we inhabit today began. Art and culture are the driving forces behind these changes and they became part of the European agenda with the signing of the Treaty of Maastricht in 1992. Furthermore, the art of the 1990s profoundly reflects a fundamental shift in civil society with the irruption of the internet and open border politics within Europe.

The project also includes collaborating institutions in Bosnia-Herzegovina and the United Kingdom.

Organised in the framework of Our Many Europes in Museo Reina Sofía: 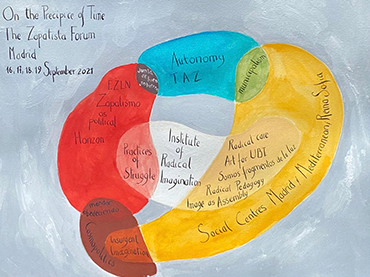 On the Precipice of Time

A L’Internationale project, inside the framework Our Many Europes

Open Call - Our Many Europes

A publication by L’Internationale online

Wide Audiences and the Visual Arts from 1950 to the Present: Agencies, Politics and Discourses