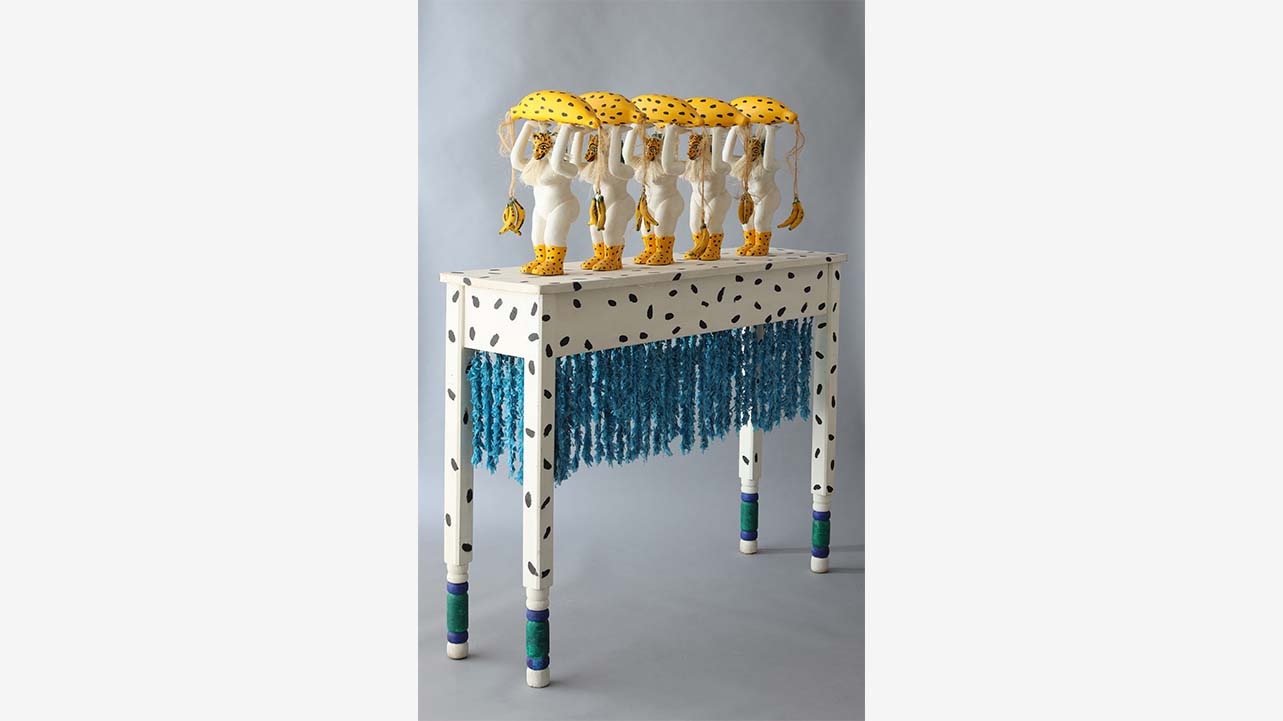 Margarita Azurdia. Margarita Rita Rica Dinamita is the first monographic exhibition in Europe of Margarita Azurdia (Antigua Guatemala, 1931 - Guatemala City, 1998), one of the key Central American artists of the 20th century. This exhibition surveys her career by way of an extensive body of work that includes painting, sculpture, and non-object art, as well as artist’s books made from drawings, collages, and poems.

Taking a retrospective approach, the exhibition offers an insight into Guatemala’s modern and contemporary art landscape and invites us to explore Margarita Azurdia’s creative metamorphosis, as reflected in the many names under which she produced her works. Whether she was Margot Fanjul, Una Soledad, Margarita Rita Rica Dinamita, or Margarita Anastasia, her chameleonic nature caused her to be swallowed up in the Latin American art world, but it also allowed her to re-emerge later as one of the most interesting artists in Guatemala’s small art scene.

In the late 1950s, while temporarily living in Palo Alto, California, Margarita Azurdia began to explore the visual arts thanks to the free workshops at the San Francisco Art Institute. Back in Guatemala in 1963, her experiences in California prompted her to hold her first exhibitions. She presented a group of oil paintings with a limited palette that looked to American Expressionism and Informalism, and a series of concentric oval-shaped paintings in contrasting colors.

In the mid-1960s she began the Geométricas (Geometric Paintings) series: large paintings with graphic designs based on diamonds, lines, and contrasting planes of colours that create a certain optical effect. Inspired by Maya textiles, these paintings were a turning point for modern art in Guatemala.

Around that time, the internal armed conflict in Guatemala established Cold War dynamics that gradually began to restrict freedom of expression and fuel the repression of dissidents and intellectuals. Nevertheless, amidst the tensions and uncertainties of this society in crisis, Guatemala City began to develop into an important hub for artists, gallerists, intellectuals, and art lovers. Azurdia, who actively participated in the debates taking place in Latin America between supporters of the movement known as internationalism and those of “new humanism” or “new figuration”—led in Guatemala by Grupo Vértebra—concluded that what was truly revolutionary and transformative in art was to take on a commitment to seek new aesthetics and concepts.

In the late 1960s and early 1970s, Azurdia achieved some international renown. In 1968, the Geométricas series was exhibited at Galería DS in Guatemala City and at Cisneros Gallery in New York.

In 1969, she received an honourable mention at the X Bienal de São Paulo for the series Asta 104, consisting of five large sculptural paintings entitled Átomo (Atom), Tótem (Totem), Tríptico (Triptych), Lotus, and Personna. The oval—a recurring shape in Azurdia’s early work—reappears in this series, linked to cosmology and to the place of humans in the cosmos. These more regular ovals refer to the symbolism of the origin of life and the concept of the “Omega Point” developed by Jesuit philosopher, palaeontologist, and theologian Pierre Teilhard de Chardin. In 1970, three of these works were shown at the third Salón Independiente in Mexico.

Like other Latin American artists working at the time, and in keeping with formal and conceptual developments in the international art world, Azurdia became interested in actively incorporating the public in her works. Reflecting the spirit of the times, at the II Bienal de Arte Coltejer (1970) in Medellín she presented Por favor quitarse los zapatos (Please take off your shoes), an installation created specifically for the occasion in which visitors were invited to surrender to a sensory experience. At the III Bienal de Arte Coltejer, her series of mobile marble sculptures were notable for being subject to the impulses that spectators brought to the works.

Between 1971 and 1974, Margarita Azurdia produced the emblematic group of sculptures known as Homenaje a Guatemala (Homage to Guatemala), which again emphasises the constant dialogue between her work and its surroundings. Azurdia originally commissioned local artisans specialising in traditional woodwork and religious icons to create fifty wood carvings based on their interpretations of her drawings and instructions. She then adorned the resulting sculptures with the profuse ornamentation typical of local handicrafts, such as clay skulls and fruit, feathers, animal skins, and masks. These intricate assemblages recall the altars of the peoples of the Guatemalan highlands, with an emphasis on the cultural and religious syncretism resulting from the country’s complex history. Some of the carvings incorporate military elements such as rifles and boots, as a metaphor of the bloody years of the counterinsurgency war in Guatemala. The use of the banana motif is a reference to the country’s troubled relationship with the United Fruit Company and the iconic novels of Miguel Ángel Asturias’s “Banana Trilogy”. At the same time, the prominence of women in Azurdia’s work should not be overlooked, with female figures portrayed as heroines and mighty warriors.

In 1974 Margarita Azurdia moved to Paris, which was a hotbed of revolutionary ideas, and began to frequent circles of women artists who encouraged her to radically change her notions about women and art. During this period, she began to experiment with her own spiritual and ritual language. As well as becoming fascinated by drawing and dance, she concentrated on writing and illustrating several of her books. Among them was Rencontres, made up of three sections and twenty-five drawings incorporating French titles associated with her experiences in Paris. In them, Azurdia reflected on life, pain, hopes, and the mystery of existence. The book, with its restrained, simple drawings, was presented at the French women writers’ association Elles tournent la page.

While in Paris, she also began a series of drawings entitled Recuerdos de Antigua (Memories of Antigua, 1976-1992), an introspective journey through the folds of memory and a therapeutic process that allowed her to let go of traumatic experiences from the past. Autobiographical in nature, the series revisits childhood moments and family ties, as well as domestic environments and periods of illness. Spatially, the drawings explore the small city of Antigua Guatemala around 1930-1940, and include references to her time in Paris.

On her return to Guatemala in 1982, Azurdia met artists Benjamín Herrarte and Fernando Iturbide. Together, they founded an experimental dance group called Laboratorio de Creatividad, which became a vehicle for their interest in movement, the origins of ritual, and sacred dance. After the group disbanded in 1985, Azurdia continued to explore relationship between art and spirit. She also kept working on the ideas of care and healing in relation to nature and the environment, through workshops she ran at the Omega Institute. Established in New York in 1977, the institute had become a countercultural hub for the study of Buddhism and philosophies that foster mind-body connections, contributing to spreading a new global spirituality. Iluminaciones (Illuminations, 1989), one of her most important books of drawings and poems, gives us a sense of the degree of spirituality she had attained and of her deep connection with the natural environment.

In the 1990s, Azurdia devoted herself to the study of the role of women in history and religion. She performed various rituals in the company of other women, such as Ceremonia de amor a la diosa Gaia (Love Ceremony to the Goddess Gaia), held in 1994 as part of the exhibition Indagaciones (Inquiries) at Sol del Río gallery, and Puente de luz (Bridge of Light), a ritual carried out at the Kaminal Juyú archaeological site in 1995. The series of paintings on paper and collages Recuerdos del planeta Tierra (Memories of Planet Earth), dating from the same period, takes a holistic and nostalgic approach to women’s historical relationship with nature and the planet through the Goddess Gaia and the Mother Goddess, which were key aspects of her work in her last period.

The exhibition also looks at Margaret Azurdia’s last works, produced in 1998, the year of her death: two wardrobealtars which she signed “Margarita Anastasia” in memory of the slave Escrava Anastacia, a folk saint venerated in Brazil. These “altars” modified with her own drawings as well as photographs, posters, musical instruments and pottery from her rituals and dances, arranged around a deity, are the best compilation of her explorations: an artistic and personal evolution that allowed her to understand the flow of life.