Visit our microsite Outside the Canon. Women Pop Artists in the Collection

During the final two decades of Franco’s dictatorship, women with an active involvement in Spain’s art scene were considered exceptions and in criticism and the media their talent was commonly made light of and termed “feminine”. Nevertheless, from the late 1960s this derogatory characterisation started to become part of a theme explored by many of these women artists, for instance the vindication of another form of art-making and resistance to Francoism. 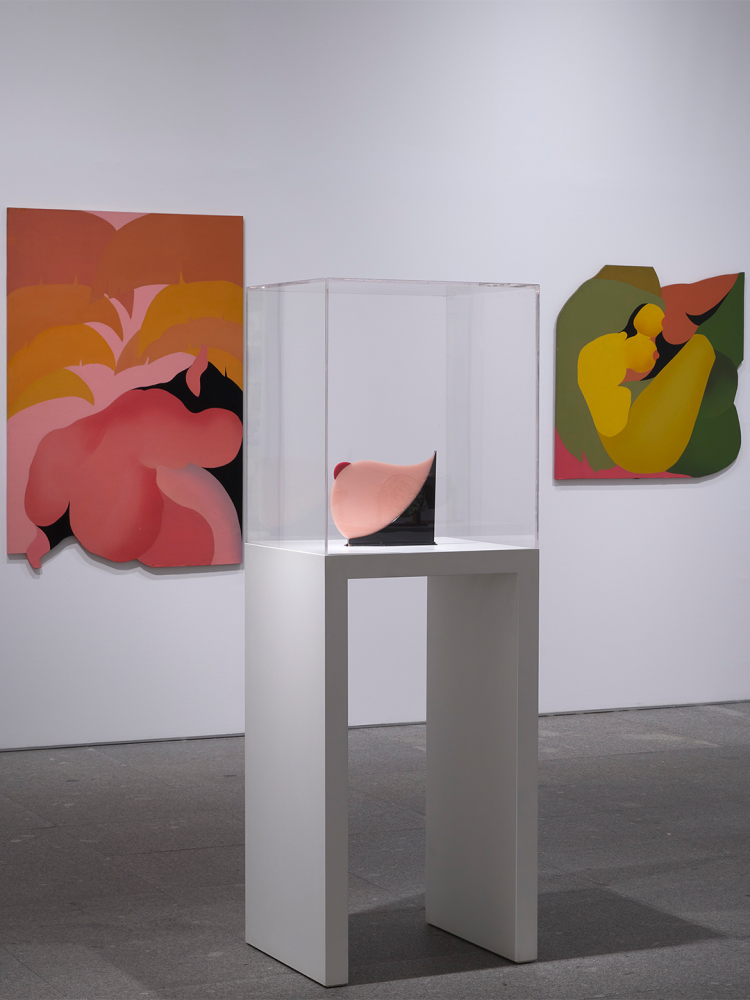 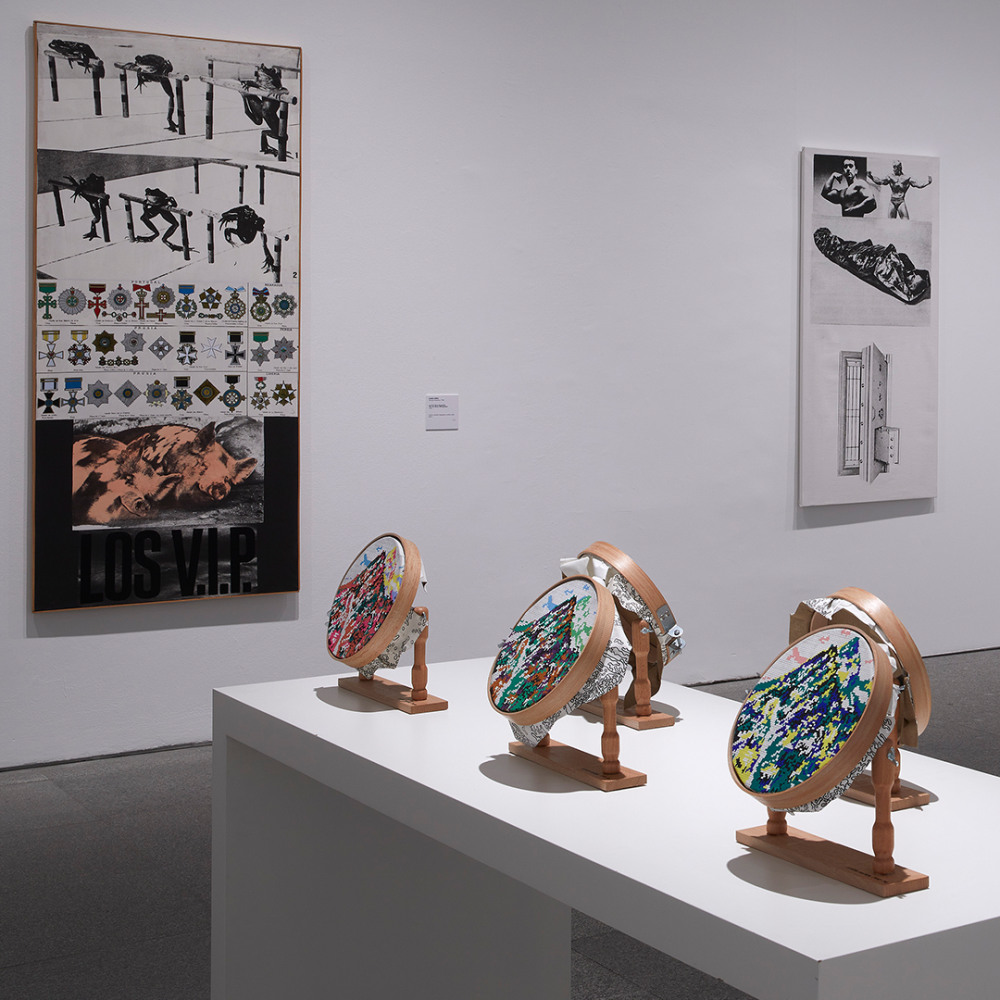 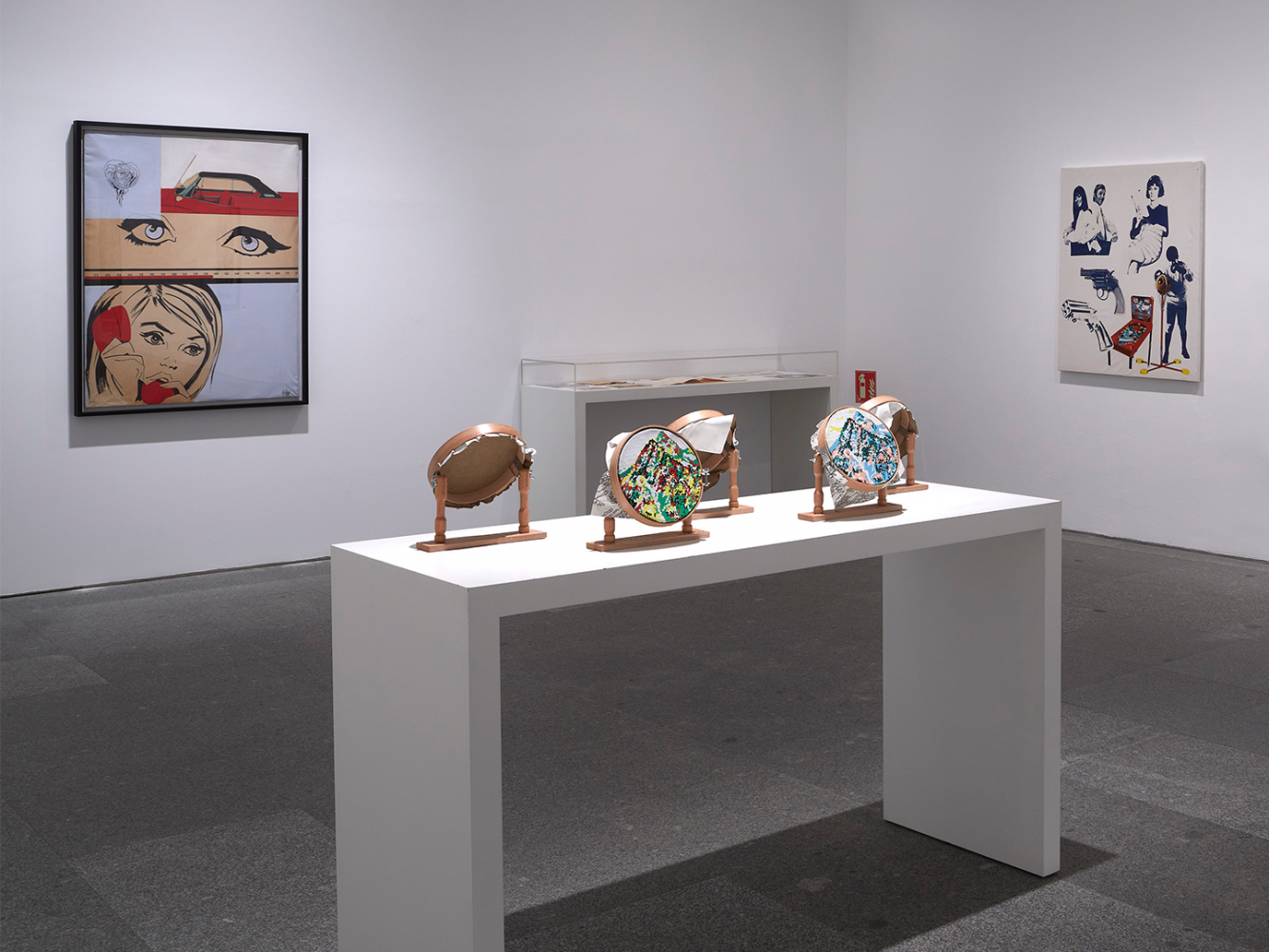 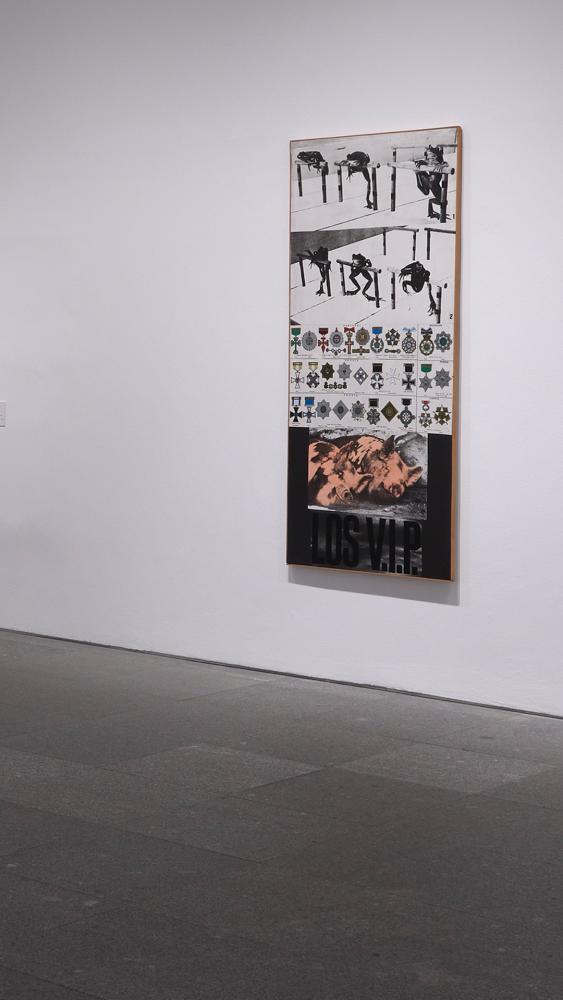 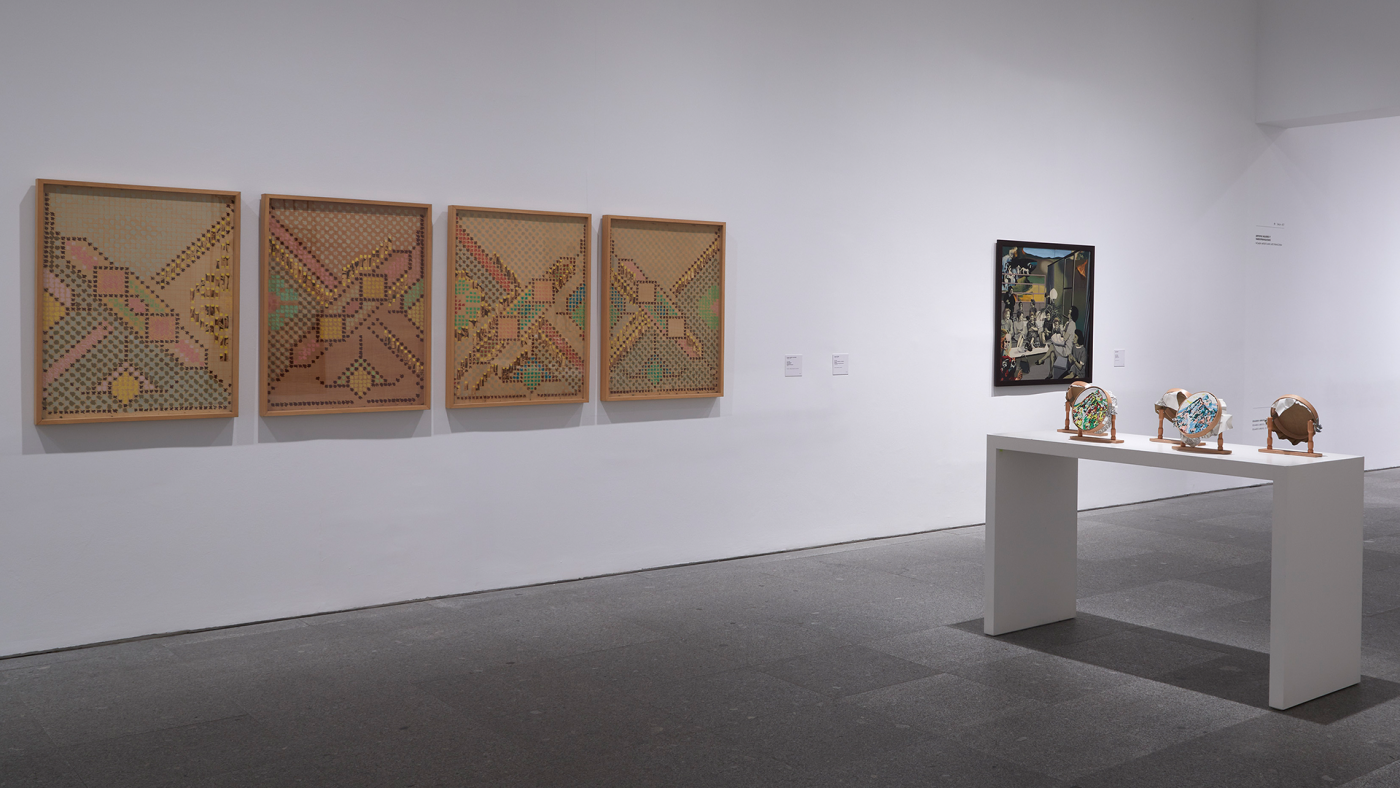 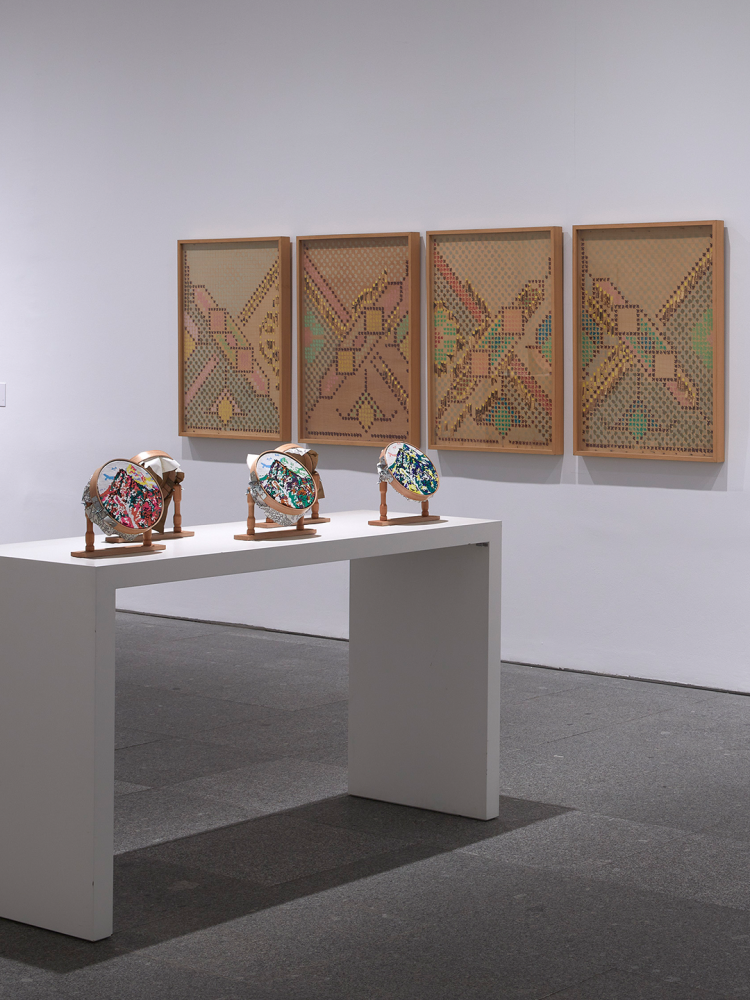 During the final two decades of Franco’s dictatorship, women with an active involvement in Spain’s art scene were considered exceptions and in criticism and the media their talent was commonly made light of and termed “feminine”. Nevertheless, from the late 1960s this derogatory characterisation started to become part of a theme explored by many of these women artists, for instance the vindication of another form of art-making and resistance to Francoism.

The room Women Artists and Late Francoism presents the works of Eulàlia Grau, Mari Chordá, Ana Peters, Ángela García Codoñer and Isabel Oliver, women artists whose careers got off the ground in the 1960s and 1970s but, forgotten in major narratives, have only come to light in recent research. Therefore, it highlights the existence of focal points of importance in generating feminist artistic discourses and political resistance: Barcelona — with works imbued with conceptual practices — and Valencia, more akin to Pop Art language. From their feminist stances, these artists started to join Anti-Franco discourses and social critique through attacks on the representation of women; they were strongly objectified in the mass media and this “female” imagery was highly conspicuous in the work of many of their male contemporaries. Their creations appropriated popular imagery to highlight how gender roles, usually from the family sphere and public sphere and projected through consumer society, were nothing more than assumptions.

In Barcelona, Mari Chordà entwined the ethics of care in her artistic production, producing works which fostered fun learning in childhood, for instance in Joguet per l’Àngela (Toy for Àngela, 1969). During Francoism, women were regarded in primary education as more suited to adaptive artistic specialities (object design) and reproductive specialities (teaching) than merely creative ones, attuned to the individual freedom personified in the “male genius”. In her series Etnografia (Ethnography, 1973–1974), Eulàlia Grau examines the role of women and men from mass media imagery, countering it by spotlighting restrictive stereotypes for both sexes and the fact that these bodies, modelled from strict canons, were presented to be consumed.

In Valencia, Ana Peters drew attention to the hegemonic model of masculinity and the use of the female body and sexuality as an advertising strategy in her work Cuentakilómetros (nº 1. Rosa azul) (Mileometer [No. 1. Blue Rose], 1966). The works that Ángela García Codoñer made in the 1970s — in her series Morfologías (Morphologies) and the piece Teta Pop (Pop Breast, both from 1973) — delve further into the idea of women’s bodies as a source of pleasure and the enjoyment of one’s own body. In De profesión: Sus labores (Occupation: Housewife, 1972–1974), Isabel Oliver, for her part, demonstrates how sewing and embroidery hide ordinariness: the idea of docile, house-proud women in the home. In the early 1970s, Oliver made, while working in parallel with Equipo Crónica, a series of feminist paintings La mujer (The Woman, 1970–1973), perhaps the closest, stylistically, to the Valencia Pop Art represented by Equipo Crónica; in Feliz reunión (Happy Meeting, 1971) she uses irony to critique the lack of feminist awareness in the majority of Spanish women, as well as the alienation they suffered upon trying to reach the sublimate stereotype that emanated from the mass media.

These artists all shared the interest of that generation in art as a vehicle to shine light on feminist protests, the resurgence of which was a critical response to the dictatorship due to the lack of political freedoms and the discrimination of women during those two decades of Late Francoism.

Previous
Room 424
Spain is Different. Tourism and Propaganda in Developmentalism. Sala Autric-Tamayo
Next
Room 428
Luis Gordillo. The Rational and the Sentimental