Study and restoration of three pieces by Ángel Ferrant 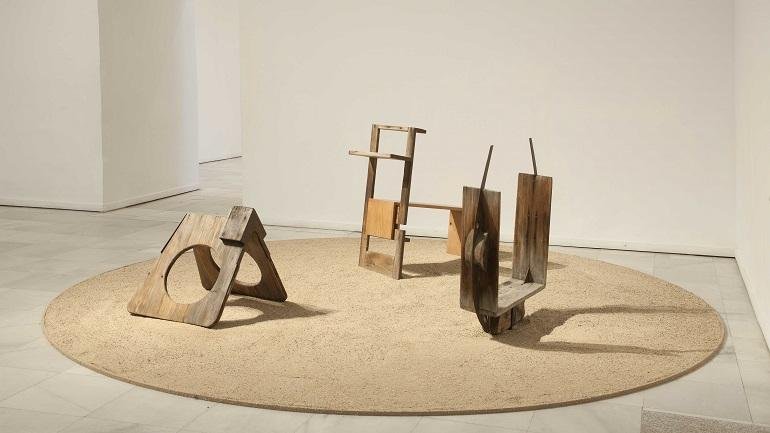 Toys by Ángel Ferrant in the exhibition Playgrounds

For the purposes of the Playgrounds Exhibition, three works by Ángel Ferrant have been loaned to the Museo, corresponding to the set of wooden children's toys he produced for the Caño Roto Housing Development (1957-63). According to Antonio Vázquez de Castro, one of the architects in the aforementioned project, Ángel Ferrant took an interest in the experience of the housing developments and wanted to "make a generous contribution, charging what a carpenter or locksmith charges me" in designing these games.

Of the set of six pieces, only these three have been conserved and, sculpturally speaking, are the most significant. The other three missing pieces that accompanied them were L-, U- and Z-shaped.

This involves three objects produced with pieces of pinewood that are joined and glued together and reinforced with iron platens screwed into the edges. Originally they were sealed with Creosote, a product that derived from tar and is banned today because of its toxicity.

Without doubt, piece No. 1 is the most worn due to that fact that boards with a certain thickness could not be used because of its shape, unlike the other two pieces. In using 1 cm thick boards in three layers, glued together in a staggered formation, finding a solution for the gaps left by the two large circles produced greater wear, mainly involving the desizing of the different boards, most of them misshapen or warped, particularly those found on the outside. There was also significant deterioration in area with the largest support of the angle which has two pieces of wood with a steel platen on top.

Out of the three, piece No. 2 is the best conserved, both in terms of the pine boards that form the piece and the curved steel platen that wraps around it. The deterioration produced was primarily down to dirt and rust from all the metallic elements, including the screws and bolts.

Piece No. 3 was clearly warped in the assembly process, particularly in the box, from one of the strips it was composed of. Various areas of the assembly were also desized, with some producing fissures in a few of the strips. This piece was missing a steel platen from one of the sides as it could be noted that it had screws on both sides. It is likely that this piece would have reinforced assembly in the area with the greatest deterioration. As with the other two, this piece showed signs of dirt and discoloration in the wood, due to being out in the open, and rust on all the metallic elements that formed its composition.

In accordance with the proposed treatment, all of the pieces that were heavily warped were dismantled in order to undergo a soaking treatment, remaining in a controlled humidity chamber for the amount of time necessary to recover the flexibility that enabled us to flatten them through constant pressure. This pressure was carried out by placing them between two pieces of blotting paper, in order to progressively remove excess humidity, and two rigid panels pressed between  two  clamps or in a press. The pieces of blotting paper were changed over daily to fully eliminate excess humidity. Once the pieces were flattened out they were glued back into their original position.
In piece 1 the deterioration of certain areas of the wood was so great that they had to be restored again; in structural areas this was done with wooden pieces, while in areas of lesser importance it was done with epoxy resin (Araldite Wood). In this same piece, also with numerous cracks, strips of the same type of wood were later dyed with nogalina (wood dye) and watercolours to imitate the original wood colour.

All the pieces were cleaned with a vulcanized latex sponge, removing the surface dirt while conserving the quality of the old wood.

In the metallic components the surface rust was removed with mechanical tools and the application of a protective treatment was considered to prevent it from forming again. Finally, however, it was not applied due to the difficulties arising from the atmospheric conditions inside the Museo. The original metallic elements, including the screws, were conserved.

Work restored with the collaboration of:
Fundación Mapfre