All sessions will be screened in digital format.
* Please, check the scheduled hours for second screenings.

This series looks at how recent documentary film has confronted and responded to the refugee crisis, considering in which form this humanitarian catastrophe has paradigmatically defined the conditions of existence in a new world under a geopolitical and subjective level. A system of relations governed by the necropolitical divide, a term coined by political theorist Achile Mbembe and used to define a new and perverse global power which polarises countries and territories between spaces of life and spaces of death in life, in which the ever-present refugee camps within European limits are no longer an exception but rather an acknowledgement of a de-territorialised and spectral citizens devoid of rights. What is the ethical and political position of images in the face of this state of exception as the norm?

No shelter. Images of Contemporary Exile presents recent films from Iraq, Syria, Palestine and Tunisia, works which seek to define  a cinema of history through testimony, documents and personal experience regarding the consequences of successive wars. Some other films employ theatricality and performativity to rehearse the different tactics of representation in a precarious and resistant subjectivity, while others address the idea of Europe as a fortress, the border as a space of global surveillance, or the troubling and sinister contemporary shadow cast over the exclusionary policies which pervaded the continent in the 1930s. In sum, this film series is an attempt to research and debate the lingering presence and imaginaries of the diverse forms of current exiles and diasporas, the physical and personal experiences of war and the construction of a reclusive identity across the Western borders. 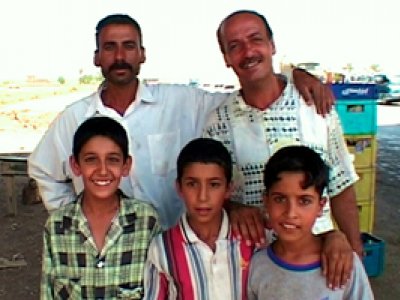 There will be a second screening of this movie on Saturday, March 11 at 11 a.m.

A monumental diptych dealing with the before and after of the Iraq War in 2003, an invasion which heralded the start of a long cycle of exile in the Middle East. Homeland depicts the reality facing a country in armed conflict through the day-to-day lives of the director’s relatives, friends and compatriots confronting the injustices and consequences of a world policy of looting without a black-and-white and stereotypical discourse. The film, an indisputable counter-image of the media construction of contemporary war, restores the voice and face of the leading figures in the tragedy, making apparent the importance of the “face-to-face ethnic relation” put forward by Emmanuel Lévinas. 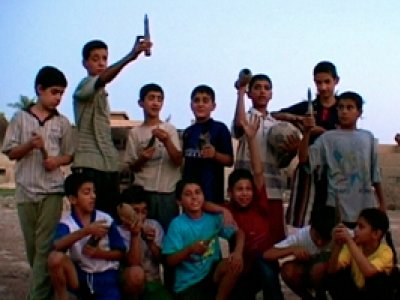 Abbas Fahdel. Homeland (Iraq Year Zero). After the Battle
Iraq, 2015, original version Spanish subtiles, colour, 174'
The screening will be followed by a discussion with Abbas Fahdel

There will be a second screening of this movie on Saturday, March 11 at 4 p.m.

Three hundred miles is the distance separating Daraa from Aleppo, making up, from south to north, the full expanse of Syria. It is also the distance the film-maker travels across to understand the progressive standardisation of destruction and death in the country in recent years. The film, viewed as one of the most lucid and panoramic illustrations of recent Syrian history, charts a disjointed map, in which internal exile and disillusionment live together behind a revolution gnawed down to civil war. 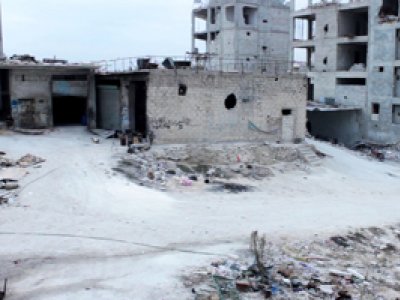 There will be a second screening of this movie on Saturday, March 18 at 7 p.m.

Three hundred miles is the distance separating Daraa from Aleppo, making up, from south to north, the full expanse of Syria. It is also the distance the film-maker travels across to understand the progressive standardisation of destruction and death in the country in recent years. The film, viewed as one of the most lucid and panoramic illustrations of recent Syrian history, charts a disjointed map, in which internal exile and disillusionment live together behind a revolution gnawed down to civil war. 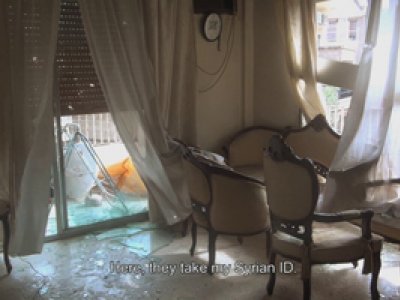 There will be a second screening of this movie on Sunday, March 19 at 5 p.m.

Judith Butler has written about the world divided into grievable lives and ungrievable lives. The sentimental role of the image is only granted to lives worthy of being mourned, while the Other would be that which lacks a public image with which to be remembered by. This film dismantles such a division to reconstruct the domestic and intimate life of the exile when he or she is deciding whether to stay and wait for death among the ruins of home or to roam like a spectre in search of salvation. Haunted approaches the war in Syria through this traumatic decision in different episodes: 'Will this be our last image?' some of the protagonists wonder as they stand before a derelict house. 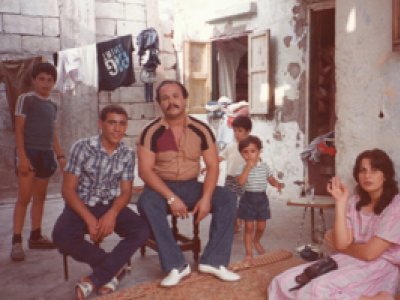 There will be a second screening of this movie on Saturday, March 25 at 7 p.m.

Mahdi Fleifel melds fiction and autobiography in a film which turns to the anomaly of humour to put across collective drama: the refugee camp as a permanent home; sixty years of exile in a place of repeated stories and inherited frustration. This is the microcosm which embodies the idea of Palestine, a State-less nation, subjugated inside and outside its borders. The director’s movement –the freedom to come and go from the camp at all times – is at odds with the frozen life of relatives and friends, seized in time and space, where the security of enclosure makes them see life outside as an unnecessary risk. They are used to being part of a political limbo which ensures their survival and the continuation of a national history lived through memories and landscapes that many never knew. 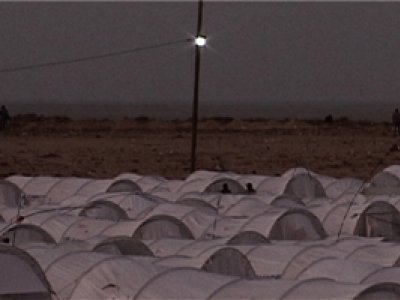 There will be a second screening of this movie on Sunday, March 26 at 5 p.m.

Babylon is a political non-place where the forcibly displaced and a large number of refugees who escaped the violence triggered by the Arab Spring in 2011 come together. With a direct and rough-edged narration seen through the eyes of three young film-makers, the film shows the process of the gestation, development and dismantling of a huge Babel on the border between Libya and Tunisia, territory without its own tongue and time, where survival is unearthed as the main nexus of communication between its inhabitants. Babylon’s non-use of subtitles to show the confusion in the camp is also intensely communicative, demonstrating the architecture of shelter as a laboratory of human survival. 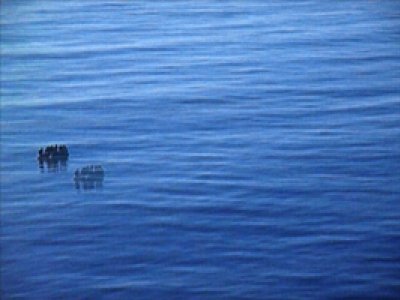 There will be a second screening of these movies on Saturday, April 1 at 12 p.m.

Liquid Traces – The Left-to-Die Boat Case is a work by the multidisciplinary collective Forensic Architecture.

With involvement in the search for public evidence from the unquestionable testimony of the artistic image, the piece recounts the case of a ship left abandoned over two weeks in 2011 between Tripoli and Lampedusa, resulting in sixty-three deaths out of a crew of seventy-two African migrants. The film presents the Mediterranean as one of the most sophisticated and heavily monitored surveillance networks through viewing the data generated during the event. This evidence is made clear by the degree of knowledge and responsibility of European states and supranational organisations regarding the events that unfolded in these waters.

Philip Scheffner, meanwhile, disrupts transience in Havarie, converting a three-minute-long amateur video into a total of ninety-three minutes, comprising the film’s only shot: a boat with stranded migrants recorded on a mobile phone from the deck of a transatlantic cruise liner. The accounts compiled and presented in a voiceover generate new layers of reflection for facing up to the collective responsibility of this shipwreck. 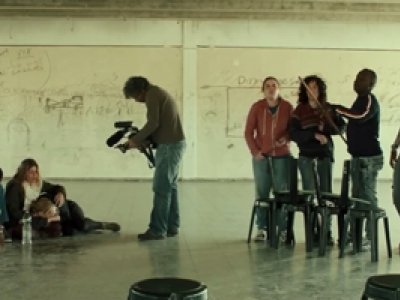 There will be a second screening of these movies on Sunday, April 2 at 5 p.m.

Avi Mograbi and Akram Zaatari, Israeli film-maker and Lebanese artist, respectively, play out a theatrical strategy and employ different performance tools to begin a process of healing or, at the very least, an expression of the traumatic experiences suffered by displaced people during their transit towards a place of confinement. Akram Zaatari presents a future of technological reclusion and dreamed-about hope through a situation frozen into longed-for gestures and bodies, which recreate the refugee’s wait in Beirut. In Mograbi’s film, on the other hand, refugees withstand the tough prison conditions imposed upon them in the Israeli detention centre of Holot, whilst also remaking their subjectivity and explaining their living conditions by designing a stage piece inspired by the thesis of Augusto Boal’s Theatre of the Oppressed. The film looks at two seemingly opposite registers which manage to unite in the same search: individual resistance from collective theatre. 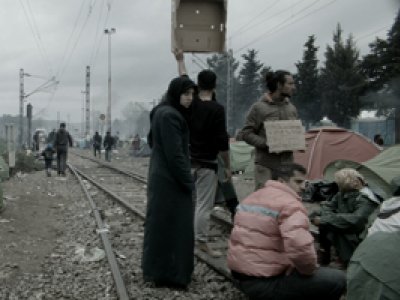 There will be a second screening of this movie on Monday, April 3 at 7 p.m.

Idomeni is a refugee camp on the border between Greece and Macedonia. Thousands of people are stranded under the rain following the closure of the “Balkan Route” decreed by Europe, whilst the train that crosses the zone moves by without stopping with its flow of goods and capital. Feet submerged in mud, broken and makeshift shoes, never-ending queues. There is no metaphor, just the cold. A group decide to occupy the train tracks. The film is presented as a triptych: the first part addresses daily life in the camp through static shots and constant waiting; the second is where the refugees, in an act of awareness-raising, block the train, confronting the symbolic dimension of the border; and the third, shot in 16 mm film as opposed to digitally, as in the previous two, with its bleak poetry, collecting the experiences of Greek refugees in Syria in 1922 and fragments from Walter Benjamin’s diary on the closure of another border in 1940: the border of Europe against fascism. 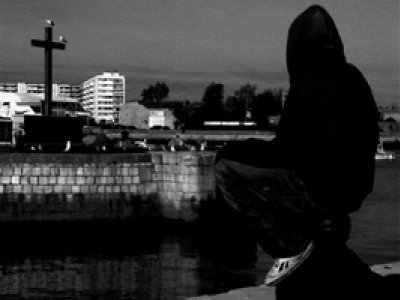 There will be a second screening of this movie on Saturday, April 8 at 6 p.m.

Incarnate spectres living in a permanent state of exception. Calais as the direct representation of the collective dispossession of the individual’s fundamental rights and their resulting criminalisation. Sylvain George is one of the most resolute contemporary film-makers to redefine militant cinema through the balance between its political and experimental capacity. Shot over three years, the film shows the life of migrants in the French town of Calais - nature framing a place of harassment. The black and white, contrasts, and intensity equals everything in the same context of persecution and escape. Details define history. Birds, branches, fences, clouds, the digital fingerprints that refugees divide up and burn so as not to not be recognised, to definitively cancel out an identity which is just a body, a bare life; bodies of the living dead. 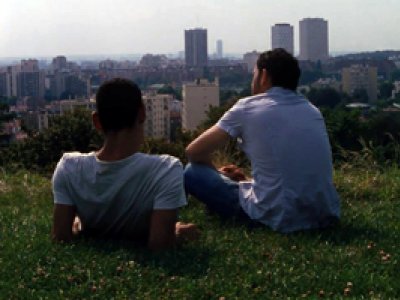 There will be a second screening of this movie on Sunday, April 9 at 5 p.m.

Revolution as a rough sea that could leave us naked and defenceless on a deserted European shore. This is the place Maki Berchache, the film’s co-director, reached as he fled Tunisia after the fall of Ben Ali. His story is told by all Tunisians; colonised lives – here, there – the struggle for freedom – here, there – eternal borders, “even sometimes on faces”, in the director’s own words. Devised as a dialogue of shared authorship, Brûle la mer is not merely militant cinema but rather militancy building cinema, community. The poetics of political cinema.