Pere Portabella’s latest film Informe general II. El nuevo rapto de Europa (General Report II. The New Abduction of Europe) addresses the political, economic, social and ecological dimension of the crisis from a perspective of networks and culture. Informe general II, premiered in the Museo Reina Sofía with this screening, engages with a new restored version of the film that precedes it, Informe general sobre algunas cuestiones de interés para una proyección pública (General Report on Some Interesting Facts for a Public Showing). Pere Portabella will be present on December 2.

In 1976 the Catalan film-maker filmed a moving monumental fresco that shone a light on the final embers of the Franco regime and the process of founding a democratic State. In a general climate of mass turmoil and disorder, Informe general sobre algunas cuestiones de interés para una proyección pública documents the final years of lead in Spain, the emergence of new political and social agents on the urban and industrial landscape, the return of abandoned memory from the time of the Republic and citizens’ aspirations of new ways of life. Over a three-hour running time, shifting between montage and documentary, history and interpretation, Portabella constructs a work that always makes the viewer aware of the filmic device and the type of account it produces.

Forty years on, Informe general II. El nuevo rapto de Europa examines that legacy in the light of the current institutional and political crisis, the margins of an account articulated during the Transition to democracy in Spain and the horizon of change culture offers as a space of discordance and critical imagination. Informe general II reacts to another hurried, unhinged and pressing time in history, in which the map of nascent politicians and institutions in 1976 have been replaced with a diagram of multiple nodes that are open and evolving. How can this new civil society be reorganised to recover the founding and transformative role of politics? In what way do institutions respond to this challenge? How does cinema connect and engage with these new processes? 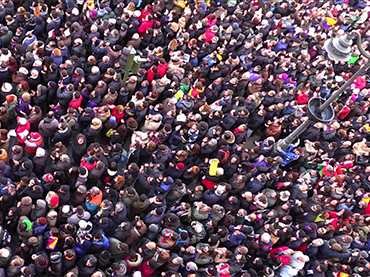 International premiere with the presence of the director on December 2.

By virtue of an encounter between intellectuals and social movements debating a new European project, held in the Museo Reina Sofía in 2014, the film plots out a complex storyline of citizen platforms, reinvented institutions and changing social processes. Informe general II upholds the role of culture as a space for questioning the present, and the role of the museum as a public institution from which to consider our own “accounts”, both inherited and future, and the type of subject that can appropriate these narratives and project them into the future. Science, citizen collectives, grassroots movements and networks all complement the cultural institution, sketching an overview of uncertainty that Portabella’s film sets out and simultaneously questions. 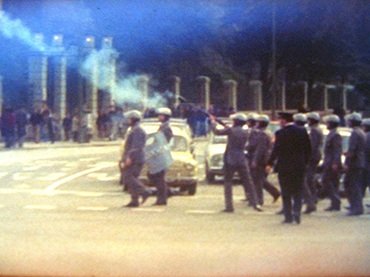 The path from the Franco regime to a society of rights is explored in this film, which pays no heed to the customary stereotypes in the documentary genre and shows a dense assemblage of interviews with clandestine politicians, images of demonstrations, films revealing the ideology of the time, past and future places of power, and re-enactments and conversations with different agents. The film, with a music score by Carles Santos, sets out a critical vision of the time period in which it was produced and which is now written in history. This new restored version will be screened alongside the premiere of Informe general II, closing the diptych on the last forty years of history.