Tickets Opening hours & prices
EN
The Museo remains open online
In accordance with that established by the competent authorities to contain the coronavirus (COVID-19), all Museo Reina Sofía sites will be closed to the public temporarily from 12 March, until further notice.
More information

Within the framework of the exhibition Esther Ferrer. All Variations Are Valid, Including this One, the Museo Reina Sofía presents Actions, a series of interventions arranged with scores in the form of a user manual and directed by Esther Ferrer (San Sebastián, 1937) in person, thereby retrieving the Fluxus spirit, the crux of her work. The actions encourage the audience to witness, walk, tell, listen, and question; in short, to experiment with the core elements in the artist’s work, aspects she will discuss with the exhibition’s curators, Laurence Rassel and Mar Villaespesa, during an encounter that marks the start of the series.

A pioneer and one of the foremost representatives of performance art in Spain, Esther Ferrer began participating in the activities of the Zaj group — with Walter Marchetti, Ramon Barce and Juan Hidalgo — in 1967. From that point on, she brought action art to the fore in her artistic practice, although from 1970 she did return to visual art by way of reworked photographs, installations, objects, pictures based on the series of prime numbers or Pi, and so on. Her work adheres to the Minimalist and Conceptual Art initiated in the 1960s, with Stéphane Mallarmé, Georges Perec, John Cage and Fluxus the points of reference, along with aspects of feminism from the time. 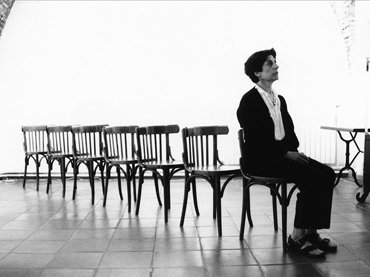 In conversation with Laurence Rassel and Mar Villaespesa

Laurence Rassel and Mar Villaespesa will engage in dialogue with the artist, touching on some of the underpinnings in her artistic practice, for instance the visibility of the creative process in time and space, the mobility and transformation of the body, and repetition and chance as a driving force enhancing her work. 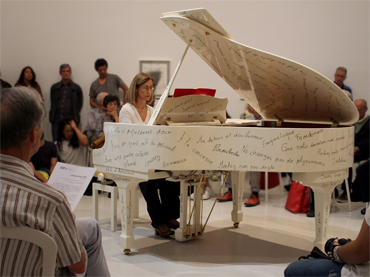 Le fils des étoiles was composed by Erik Satie — who later arranged the preludes to the work for a piano solo — in 1891 to accompany a three-act poetic drama by Joséphin Péladan. This composition is considered one of Satie’s most radical works because of its explorations with quartal harmony and its concept of theatre music, leading to it being classified as ‘decorative static sound’.

Esther Ferrer’s work Piano Satie has been produced for the exhibition by the Museo Reina Sofía. 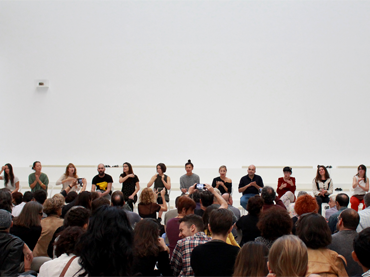 I’m Going to Tell You About My Life

We’re going to tell our life stories, either true or false. Who knows? It doesn’t matter anyway, because even if we recount an invention, the very fact of telling it is inevitably part of our lives, our biographies. Each language has its rhythm, its particular sounds, and we all have a way of using it with gestural language that distinguishes us. When we all speak in unison, it’s as though we were listening to the world’s voices: all are languages, but all are different; all are vulnerable but necessary.

This activity is sponsored by: 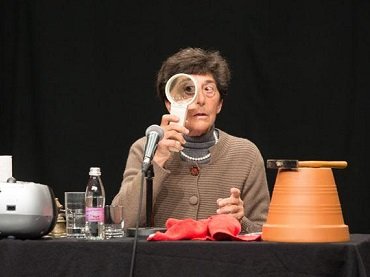 The Art of Performance: Theory and Practice (1) and (2)

A performance is a lecture or a lecture is a performance, a theory that becomes practice, a practice that becomes theory. In this two-session performance lecture, Esther Ferrer calls into question that which is understood by the performance genre, that which is conveyed and how much of it is understood by the audience: the real, imaginary, logical, absurd, obvious, the less obvious, a specific mode of doing and speaking. Because in truth, what is a performance? A genre? A hybrid? Artistic expression? A tall story? A joke? A Challenge? A scam? Torture? Anything? 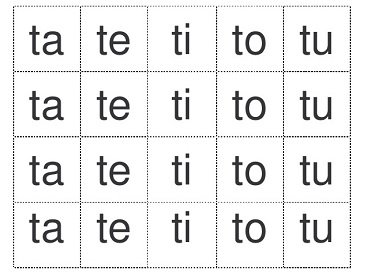 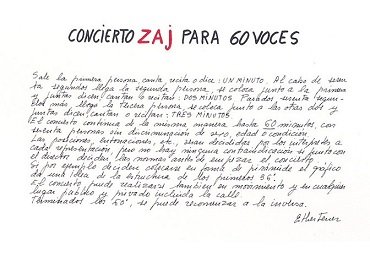 The world makes sound, time passes; we barely notice, immersed as we are in that maelstrom of sound and noise which appears to clog up our hearing. The chant, the yell, the recital, the speech, the interrogation… they arise hoping to lend rhythm to this chaos, yet once again chaos rules to become a wall of sound, compact, impenetrable.

The ZAJ concert assembles 60 voices, paying no heed to sex, age or social position, and is directed like an orchestra by the artist. Each performer can speak, recite or sing the corresponding phrase just once or repeat it as many times as they wish in the space of one minute, changing language, intonation, etc. as they please.

Performance art Music, Dance and Performance Encounter
The Museo remains open online
In accordance with that established by the competent authorities to contain the coronavirus (COVID-19), all Museo Reina Sofía sites will be closed to the public temporarily from 12 March, until further notice.
More information